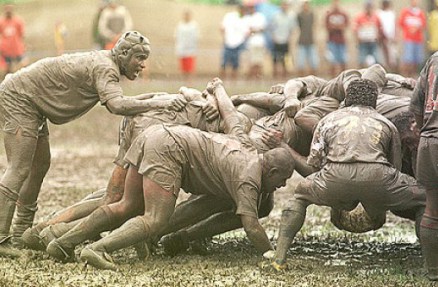 Here is part two of my series on applying sporting management techniques in the Agile world.  This time it is the turn of Clive Woodward and what happened when his rugby team changed shirts at half time.

Clive Woodward and the Clean Shirts

During Clive Woodward’s reign as England’s rugby manager, he went through a phase when his team’s performance levels dropped off after half time.  That is the team would often produce a top  performance in the first half of a match, go in at half time, then re-emerge for the second half and fail to meet their earlier standards.

After ruling out a whole set of reasons as to why this was happening, including fitness levels, they decided to consult a sporting psychologist.  The psychologist formed a hypothesis that if the team thought of the second half as a fresh start and not a continuation of the match, then perhaps second half performance levels would improve.  To test the hypothesis, they started giving the players fresh shirts at half time.  And as a result, the issue disappeared and second half performance standards rose.

So how can this help us when working with Agile methodologies?  Well, Agile teams at their best strive to  iterate frequently, minimise cycle times, release continuously.  After a while though, in some cases this can lead ennui.  Teams start thinking “here we go again, another stand up, another planning session, another retro”.  In more acute cases, teams may even refer to being on a “death march” of repetitious activities with no end in sight.

And this is where the “fresh shirts” approach may help us.  Once in a while, it may benefit teams to refresh or reboot their environment to give that sense of a fresh start.  This could be achieved in a number of ways.  Shuffle team members.  Rotate managers, leads, roles.  Recruit fresh blood.  Celebrate a particular success or delivery.  Hold kick off sessions for new products or significant increments.

The point is that many do not like feeling that they are on a hamster wheel.  If teams are feeling that way, it may be time to try fresh shirts.